How the perennial almost-man of Snooker beat the best in the world – again! 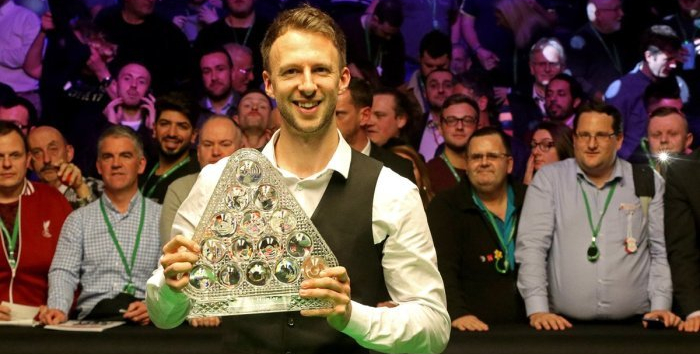 One, of snooker’s most famous almost-men just won one of the biggest prizes in the game. But, how did Judd Trump go from being snooker’s brightest, newest star to an entertaining, but perennial almost-man, to someone who’s taken on the best player alive, and come out on top – twice in two months!

Early success can be blessing and a curse. Just ask Britney Spears. For Trump, his 2011 victory in one of snooker’s ‘triple crown’ events at the tender age of 21 was certainly a double-edged sword. His victory at that event, the 2011 UK Championship established him as a big time star and catapulted him into the top 16 of the rankings, where’s he’s remained ever since. In fact, he’s stayed in the top 10 for the last five years, despite inconsistent performances, underwhelming losses and an intermittent presence at the business end of tournaments.

The last 5 years of Judd’s career have been beset with constant niggling from fans and pundits alike. Despite delicate tweaks to his game and a much improved temperament, his lack of maturity and focus continued as the main talking points. During the 2016-17 season there were further tweaks, including much improved shot selection, and perhaps shockingly, the introduction of some very effective safety play.

The man who gave the sport his own brand of ‘naughty snooker’ once said he could pot any ball, from anywhere on the table. Whilst that’s probably true, and is certainly a challenge to beat on the exhibition circuit, in competitive play, his pot-all policy came at a price.  Always one of the best, and certainly one of the most daring potters in the modern game, Trump has frustrated everyone, including himself, with a series of should-of-won losses and unconvincing victories. Despite those delicate changes to his game, the 2017-2018 season seamed to be the nadir of almost-ness. Now it was Judd who was growing tired of the constant needling over his abundance of talent, versus his lack of ranking titles.

During a post-match interview in 2017, former seven-time world champion Stephen Hendry, asked in typically blunt fashion, “when are you going to start turning this success into titles?”. The question was probably rude, certainly succinct, and possibly justified. Of course, Judd answered in characteristically diplomatic way, but that question must have been ringing in his ears for a while afterwards. .

As the 2018-19 season kicked off, it became clear very quickly, we were seeing a new Judd.  Juddernaut 2.0, if you will. Typically found among the last 16 in most of the season’s tournaments, his victories have all been landslide affairs. His most impressive win of 2018 – the Northern Ireland Open, when Trump met Ronnie O’Sullivan in the final, and beat the rocket 9-7 to claim the prize. It was decisive win, and at time of writing remains just one of three losses for Rocket Ronnie so far this season.

For a lot of the top sixteen players, the Masters is the first tournament of the calendar year, following a 3-week Christmas break between tournaments. It’s enough of a break to change the order of things slightly, as players take advantage of the opportunity rest and practice. It’s always interesting to see who continues their form of the previous year at this event. Would Trump continue to dominate his matches? 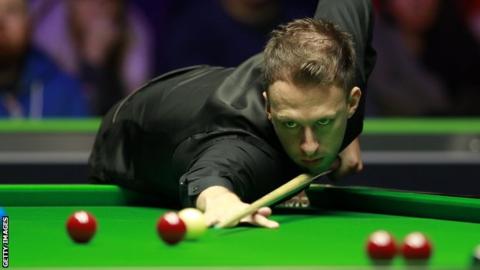 One of the most special things about the UK Masters, is the one table set-up. Held at London’s Alexandra Palace, it’s a place for only for the top 16 players in the world. Every match is a main event would be a fine final to grace any other event. The eight day tournament leaves the best in the business with nowhere to hide, so if you’re not on form – it’s going to show.

As if demonstrating what a competitive break can do for a player, Mark Allen lost in spectacular style to Luca Brecel in the opening match. 2018 was an impressive year for the defending champion but he was sent home early, in a swift shocker of a match. It set the trend for round one, as a list of top name players crashed out, their best form continuong to elude them at the beginning of 2019, just as it had at the end of the previous year.

Trump set his stall out early by beating Kyren Wilson packing 6 frames to 2, to set up a quarter-final match against world number one, Mark Selby.

Often cited as having the most solid safety play in the business, there was a time when Selby could trounce Judd in that department. In response to this weakness, more and more, safety play has entered his game. Whilst this has had an impact on his dynamic and exciting way of playing, it’s also had a profound effect on his performance.

I remember the first time I saw him pass up a tempter. It was a little disconcerting, if I’m honest. But, not only had Judd introduced more safety play, but it’s become really, really effective safety play. This isn’t a competitor out of his comfort zone, this was a master at work.

There aren’t many who can compete with Selby in the safety department, let alone out-play him. It’s true that the ‘Ace in the Pack’ found the world number one at the bum end of the form-scale, and it remains to be seen if he can compete when the ‘Jester from Leicester’ is firing on all cylinders, but on that night at Ally Pally, there’s no doubt Judd was the one in control. He beat the former world champion decisively 6-2.

The semi finals brought a scintillating and grounded performance against Neil Robertson. The Aussie has had some patchy moments over the last couple of years, but he’s back in form now. Judd must’ve known it would take something special to see off Roberson, a former two-time winner of the Masters.

Leading his opponent 4-3, Judd was 40 points ahead when he was faced with a risky red into the middle pocket. With the brown ball  already covering the ‘yellow pocket’,  there was a comfortable, in-built element of safety if he went for the pot. Two years ago, it’s a shot he’d have taken on, without a second thought but, in perhaps the biggest show of maturity of the last five years – Judd refused it. Instead, he skillfully rolled the cue ball in tight behind the brown, snookering Robertson completely. It was a frame-winning shot and a rare instance of a frame turning to victory in  foul points. There was no shame in this at all. It was the right shot and it was judged to absolute perfection. Even the ‘Thunder from Down Under’ had to concede, it was a blinder. To some, this was a shock. The master potter had turned one down. But, to anyone following the game closely, this frame-winning snooker – from Mr Naughty Snooker himself, merely signaled the completion of a transition that began two years ago.

Although demonstrating great cuing, and some choice shots when he was among the balls, couldn’t stop Robertson falling to the ‘Juddernaut’ 3-6.

Ronnie has looked unstoppable again this season. Already having bagged the UK Championship, the rocket was the clear favorite to win this tournament. As the week went on, he decisively knocked out Stewart Bingham 6-2, Ryan Day 6-3 and beat Ding Junhi by a similar scoreline, to set up a highly anticipated Northern Ireland re-match. Surely, it would just be the final stop on his journey to an incredible eighth Masters victory? 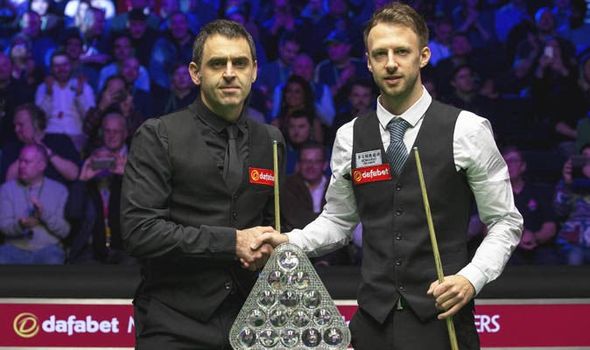 To describe Judd as the underdog in this match, as some media outlets have, not only ignores the major changes he’s made to his game but skips over a very recent ranking title victory. There’s no way Trump was the underdog going into the final. He’d beaten Ronnie decisively just two months ago in the aforementioned final of the Northern Ireland Open. Except this time, he had  more to contend with than just the best in the world,in the form of his life.

Alexandra Palace looks as glitzy as you like, for a snooker venue, and it’s to service an audience of 1,900 passionate spectators. With the audience cheering for Ronnie’s every move, Judd wasn’t just competing with the best in the game, he was also competing against a very vocal crowd.

Earlier in the tournament, we’d seen Ryan Day’s hands tremble as he made his shots, clearly intimidated by the loud pro-Ronnie voices in the audience. It’s hard to imagine anyone as confident as Judd Trump being similarly affected, but to say that does not do justice to how loud and boisterous this audience can be.

As the match went on, they became noticeably quieter, with their hero facing a game of catch-up from the beginning. When Judd left the auditorium at the end of the first session, leading the favorite by six frames to two, they were positively subdued.  At the beginning of the evening session, they were ready to cheer Ronnie on to equalize, and when it went to 9-4 after two high scoring frames on the bounce, there seemed to be a chance the rocket might just manage to force a decider and take a record-setting victory. But, it was not to be.

Perhaps intimidated by how well Judd had been playing before, and throughout the tournament,and possibly slightly smarting from his humbling defeat in Belfast, it was a subdued Ronnie who arrived on Sunday, and a significantly battered Ronnie that left. He’s never had an easy time of it against Bristol’s finest.

It was a quiet, meaningful celebration from Judd, no doubt aware of how unpopular wild jubilation would be. There was no cockiness, no attitude – just solid snooker and tremendous sportsmanship.

A cheque for £200,000 and custodian duties to a 200-pound Waterford Crystal trophy is pretty damn tasty by anyone’s standards, but one of the sweetest prizes won here must be the enforced change of narrative. No longer can television pundits accuse Judd Trump of not fulfilling his potential. No longer can fans accuse him of under performing. For the next twelve months he’ll be introduced as the 2019 Masters champion. The title will last one year, but the legacy is just beginning to unfold. 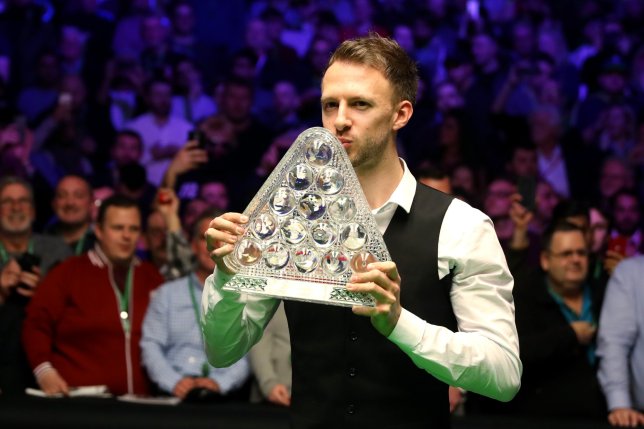